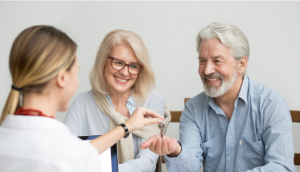 The under-30 market that is patiently trying to climb the property ladder may come to mind when you think about the rental market.

However, the number of working-age people moving into rental homes and HMOs has increased quickly.

The proportion of SpareRoom tenants who are 55 to 64 years old is growing.

Are you promoting your properties to this market and are you aware of its size? This blog post describes the transition and the importance of being ready for it.

Which groups of people use rental accommodation ?

Since 2011, the number of people aged 55 to 64 looking for houseshares has increased by 239%, according to the top flat-sharing website SpareRoom.

What is the over 40’s housing trend?

According to population projections, the proportion of people over 55 in the UK will rise from 30% to 36% by 2043.

There are now about 26 million people in the over-55 age group, or six million more than the last stats from the ONS

Many of these households, according to Paragon’s research, are likely to become renters rather than homeowners in the future.

This is being accelerated even faster by shrinking costs, higher rates of divorce in later age, and less generous pensions.

According to ONS data, the number of men 65 and older who divorced increased by 23% between 2005 and 2015. Divorce rates increased by 38% for women of the same age.

One of the main causes of older tenants, according to the survey, is that men are living longer.

In the meantime, pensioner income has been constant since the beginning of the previous decade.

Over the years 2009 to 2019, inflation amounted to 3.1% annually. Savings income has also been constrained by the low interest rate environment over the last ten years.

What factors account for the changing demographic of renters?

Affordability, according to Matt Hutchinson, head of communications for SpareRoom, is the primary driver behind older people house sharing.

According to the survey, more people are “lifetime renters,” and those who have ended long-term partnerships and may have previously purchased or rented a one-bedroom apartment are now priced out.

Since Covid limitations were loosened in the summer of 2021, rental costs in the UK have been steadily rising.

According to the BBC, a 3.2% increase in rental costs occurred in the 12 months leading up to July as a result of increased demand.

The average asking rent outside of London reached a record high of £1,126 per month from April to June, up 11.8% from the same time previous year, according to real estate website Rightmove.

A website called Cohabitas promotes housing shares for persons over 40. According to them, there has been a 44% increase over the same time last year.

Co-founder Eva Orasch stated that the UK’s ageing population and rising house prices were the long-term trends causing the surge in sharing among older age groups.

She claimed that in the near term, the pandemic and growing living expenses were also factors, with some people no longer willing to live alone after lockdown.

The website conducted a study in 2021 and discovered that 48% of participants shared for both financial and social reasons, while 45% chose to share for only financial reasons.

How can landlords make an investment in senior tenants?

According to Paragon research, a fifth of landlords anticipate that the market for retired renters would expand over the coming year.

This group of tenants often occupies a property for a longer period of time, takes good care of the property, and enjoys a steady income, typically in the form of a pension.

Homes must be able to accommodate the physical limitations that some of these tenants may have, as they are considerably more likely to have a handicap or chronic illness.

According to Rowntree, landlords must adapt to the shifting demographics more frequently as older tenants become more prevalent.

“Landlords will need to take into account longer lease terms, the location of their property, and any modifications the property may need for tenants in later life.”

What will we do next?

The large variety of property investing courses offered by Touchstone Education, the top provider of property education in the UK, can help you expand your clientele base.

The top two-day property investment course in the UK, Wealth Through Property, will teach you the most effective property tactics right now.

You will learn exactly how to exploit another landlord’s property to generate a profit on rent each month with the help of Rent to Rent Strategy.

You can earn thousands of pounds each month through serviced accommodations with the aid of the Serviced Accommodation Blueprint.

Subscribe to our Newsletter to receive news directly to your inbox

We use cookies on our website to give you the most relevant experience by remembering your preferences and repeat visits. By clicking “Accept All”, you consent to the use of ALL the cookies. However, you may visit "Cookie Settings" to provide a controlled consent.
Cookie SettingsAccept All
Manage consent

This website uses cookies to improve your experience while you navigate through the website. Out of these, the cookies that are categorized as necessary are stored on your browser as they are essential for the working of basic functionalities of the website. We also use third-party cookies that help us analyze and understand how you use this website. These cookies will be stored in your browser only with your consent. You also have the option to opt-out of these cookies. But opting out of some of these cookies may affect your browsing experience.
Necessary Always Enabled
Necessary cookies are absolutely essential for the website to function properly. These cookies ensure basic functionalities and security features of the website, anonymously.
Functional
Functional cookies help to perform certain functionalities like sharing the content of the website on social media platforms, collect feedbacks, and other third-party features.
Performance
Performance cookies are used to understand and analyze the key performance indexes of the website which helps in delivering a better user experience for the visitors.
Analytics
Analytical cookies are used to understand how visitors interact with the website. These cookies help provide information on metrics the number of visitors, bounce rate, traffic source, etc.
Advertisement
Advertisement cookies are used to provide visitors with relevant ads and marketing campaigns. These cookies track visitors across websites and collect information to provide customized ads.
Others
Other uncategorized cookies are those that are being analyzed and have not been classified into a category as yet.
SAVE & ACCEPT